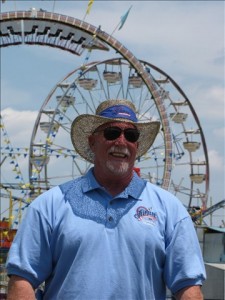 Jerry L. Ivory was selected to be the 2013 Chesapeake Jubilee as a result of his long tenure with and dedication to the Jubilee.  For past several years, Jerry has served as coordinator of the Chesapeake Stage, which serves up many local, talented bands. He has served in many capacities over the past 30 years, including the supervision of the waste management areas associated with the festival.

It isn’t by coincidence that Jerry was selected as Chairman for 2013.  The Jubilee will be hosting the 50th anniversary of the City of Chesapeake, and being a 40 year employee of the City of Chesapeake and a 30 year Jubilee participant, it was only fitting that Jerry preside over the City’s birthday and the Jubilee’s anniversary.  He has spent his career in the Public Works Department, with 39 years in the Waste Management Division.  His current position is Operation Superintendent of Waste Management.

Jerry holds a BA degree in Public Administration, with minor in Human Resources from St Leo University.  He is a Certified Collection System Manager, via Solid Waste Association of North America; Recycling Coordinator for the City of Chesapeake, and a graduate of Chesapeake Leadership University.

Jerry received the Robert S. Hopson Leadership Service Award, which is presented annually by the American Public Works Association (APWA) to recognize a public works official at the supervisory level for outstanding service and meritorious achievement in local government service.  He received this award from the Virginia/Maryland/DC Chapter in, 2007. He was instrumental in the successful APWA accreditation of the Public Works Department.  He chaired a subcommittee in reviewing and writing procedures for practices. The award recognized Jerry`s uncanny ability to focus individuals to a task and facilitate the group to complete procedures in a timely manner.  Jerry is proud to be a member of the APWA because it develops and supports the people, agencies, and organizations that plan, build, maintain and improve our communities.  Jerry is all about doing what is good for his community, his City.

Jerry has excelled in everything he has set his sights on.  He was awarded the Literary Award from the American Public Works Association for the community information videos he produced with Tammy Barry for recycling presented on Chesapeake’s Channel 48.  These videos were developed to inform the Chesapeake residents of the city`s effort to improve recycling and provide additional information about Chesapeake’s new recycling program.

Jerry has lived in Chesapeake since he was 9 years old.  He and his wife of 38 years, Lou Ann (Morelli) Ivory have two daughters, Julie Bristow and Lisa Amerson, and two grandchildren Gabrielle and Colton Amerson.  The Chesapeake Jubilee is proud to have Jerry L. Ivory as the 2013 Chesapeake Jubilee Chairman.  2013 has all of the potential to be the City’s finest festival in its 30 years.