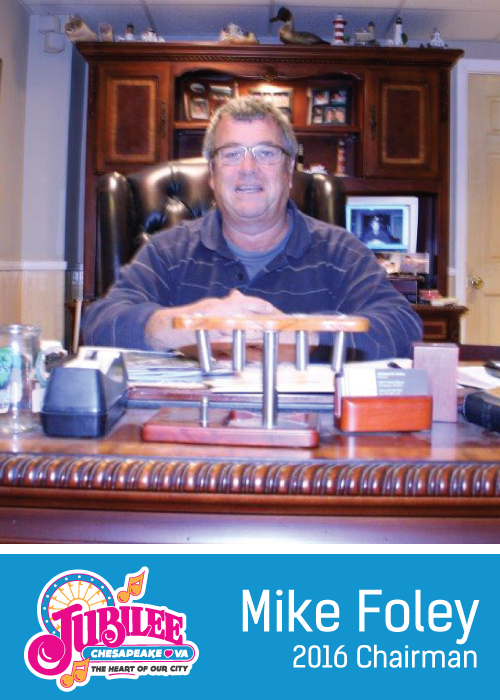 CHESAPEAKE, Va. – Former Chesapeake Jubilee Parking Lot Chair Mike Foley has been the gatekeeper for this quintessentially Southern, perennial local event for more than 33 years. Now in his role as 2016 Chair of the Jubilee, Foley remembers those years in the late ‘80s and early ‘90s when it was necessary to coordinate Jubilee guest parking with the warden of Camp 22, a women’s farm prison. For a period of time, Camp 22 was one of the Jubilee’s neighbors at Chesapeake City Park. “Those days are long gone,” says Foley. “However, for several years, parking at the Jubilee was executed after some extensive and delicate pre-planning.“

“As parking lot chair I saw first-hand the excited expressions on the faces of little kids and adults as they emerged from their cars. The cooking smells, the sounds, the festive atmosphere, the carnival noises, and the anticipation they were about to experience something joyous contributed to the Jubilee’s popularity with so many,” says Foley.

“What I find refreshing is that the same group of selfless people have successfully worked together for more than 30 years to produce the Jubilee. This yearly process is somewhat of a throwback to an earlier time, when things were less complicated and people left their egos at the door.”

Foley joins a long and distinguished list of civic-minded individuals who have served as Jubilee Chair. He is president and co-owner of Mid-Atlantic Leasing Corporation, a family owned business established in Chesapeake in 1973. He is also vice president of Fleet Way Properties and president of CMR Assets LLC. Foley is married and has four children. His hobbies include anything that has to do with family, as well as fishing, boating and a little scuba diving.

The Chesapeake Jubilee has something for everyone. It is known for its food, and there is plenty of it. Get ready for the scrumptious Chesapeake Kiwanis Shrimp Fest, and the Annual BBQ Cook Off, sanctioned by the Kansas City Barbecue Society. Also on hand will be plenty of “festival food” – everything from funnel cakes to turkey legs.

Fireworks are an integral part of the Jubilee, and on Saturday night, Zambelli Fireworks promises to put on a spectacular fireworks display reaching new creative heights.

Amusements of America, the largest traveling amusement park in the world, will be on-site with rides and games guaranteed to thrill. Kids Korner is a fun, free zone for children and families, with hands-on crafts, face painting, musicians, jugglers and other entertainers. The Arts and Crafts tent is bigger and better than before, and community non-profits and the armed forces will be on hand to showcase their exhibits and displays.

The Chesapeake Jubilee is a not-for-profit organization governed by an executive committee composed of previous Jubilee chairs. Its objective is to celebrate the City of Chesapeake’s history while building community spirit and unity.

The Chesapeake Jubilee is Thursday, May 19 through Sunday, May 22 at Chesapeake City Park, 900 Greenbrier Parkway.

Please visit the website at www.chesapeakejubilee.org for specific hours, ticket, admission and wristband pricing, parking, directions and other information.